Pelican Handgun Instruction ("PHI") is a Louisiana-licensed (and nationally-licensed) handgun training company that offers several programs, including an NRA-certified concealed weapons course.  This course satisfies the training requirements for your Louisiana or Florida (resident or non-resident) Concealed Weapons Permit. See the "Concealed Weapon Permit Course" section for more information.  PHI is insured through the NRA.

Philosophy:
PHI is geared toward the beginner or novice shooter - even if you have never handled a gun before, you will be proficient at the conclusion of the Concealed Weapon Permit Course.    Your instructor, James Reeves, also has enough experience to improve already seasoned shooters as well.  PHI strives to make you comfortable and to present the required material in an un-intimidating, conversational, and casual setting.  You will not be embarrassed, used as an example of "what not to do," or made uncomfortable.  Questions are welcomed, no matter how simple.  While your instructor is skilled, PHI is not a "tactical" school - you will not compete against your fellow attendees, and class is not conducted in a hyper-masculine, "drill instructor" fashion.  (After your skills have progressed, there are higher-level tactical-style courses that are available in the area from qualified individuals - check the site sponsors at www.BayouShooter.com).  Safety will be rigidly enforced.

PHI is owned operated by James "J.J." Reeves.  James is a practicing attorney in downtown New Orleans, and is an avid shooter and NRA certified instructor.  James is certified with the State of Louisiana as a licensed instructor (Louisiana State Police Instructor no. 659) and has provided formal training since 2012.

James has trained at the famous Front Sight Firearms Training Institute in Las Vegas, Nevada, at Tier 1 Group (better known as "T1G") in West Memphis, Arkansas, and is a graduate of the Appleseed Marksmanship Program, earning his Expert/Rifleman qualification on the Army Qualification Test ("AQT") with a centerfire rifle during his first course.  James previously started, owned, operated, and sold one of the highest-volume gun stores in Florida after graduating from Florida State University.  While studying at Tulane Law School, James was hired by a national distributor to be a regional sales representative, selling over $100,000 worth of inventory a month in that capacity.  James maintains strong contacts in the firearms industry, and is an active member of SIGForum.com, AR15.com, BayouShooter.com, GlockTalk.com, and many other firearm discussion forums.

James is a member of the Glock Sport Shooting Foundation (membership no. 69621) and has won a division title (See the Glock Report, 2008, vol. II at page 4).  Strangely enough, James was selected to compete in Maxim Magazine's shooting/tactical competition, "MAXIMum Warrior" for the 2011 season.  The competition consisted of five brutal physical and shooting-related challenges (the videos are available online), and after a week of competition, James earned the "MAXIMum Warrior" title (see 2011.MaximumWarrior.com).  James donated $1,000.00 of his prize money to the Wounded Warrior Project, as James is a supporter and member of the WWP (membership no. 6102760821).  More recently, James was featured in "Breakfast With Strangers," a book project, where James discussed (among other things) his background in the industry for inclusion in the publication.  James is also Goruck Tough.

Finally, James is a staff writer for The Firearm Blog, one of the largest gun blogs on the internet,  and he is also a co-host of the blog's YouTube channel, TFBTV.


After years of informally instructing friends, relatives, and colleagues, James decided to become an NRA certified pistol instructor in order to promote a safe and positive public image for the firearms industry, and to provide practical, straightforward, and safe training for those who have little to no experience with firearms or pistols.  James looks forward to working with you to improve your skills and to introduce you to proper firearms handling and marksmanship.

James is a resident of uptown New Orleans with his wife, Lindsay. 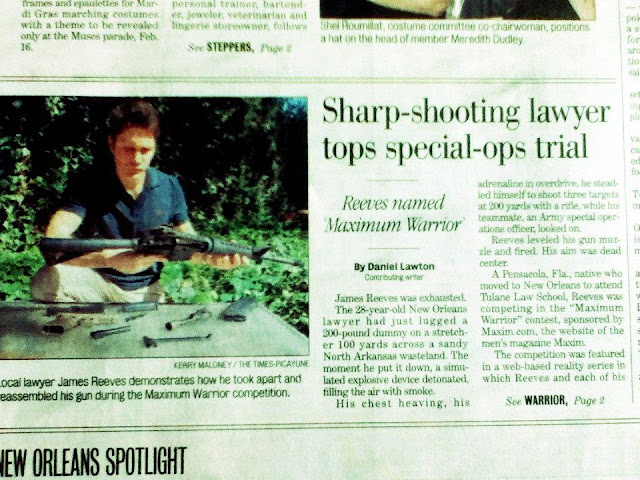